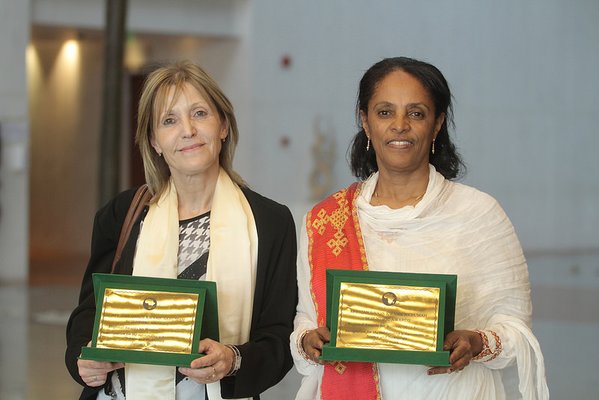 Prof. Merzouk Hafida from Algeria and Prof. Yalemtsehay Mekonnen from Ethiopia  laureates of the AU Kwame Nkrumah Scientific Awards received a cheque of 20,000 USD each, a gold plate medal, a certificate and flowers from the representatives of the AU Commission.

The Algerian Professor Merzouk is a graduate from the University of Tlemcen, where she received her Diploma DES in biology and Magister in animal biology. She was recruited as a teacher assistant in 1992 at the Institute of Biology, and provides courses and practical works to students in biochemistry and physiology specialty. Having a training scholarship abroad, she completed her doctoral researches at the University of Burgundy in Dijon, in the field of maternal nutrition, macrosomia and fetal growth retardation. After her Ph.D. thesis, she took the lead of a magister on physiology and cellular pathophysiology and conducted several magister theses on topics relating to cell dysfunction and diseases such as obesity, diabetes and hypertension. She became a professor in 2004 and directed several doctorate theses in nutritional biochemistry. She has served in many administrative positions. Currently, she is the director of PPABIONUT laboratory where she manages several research projects on preventive nutrition and bioactive molecules, in collaboration with French teams in Dijon, Evry and Strasbourg. Very involved in her research, she is the author of numerous international publications and participates in several international conferences. She is also known for her active membership in the Algerian society of nutrition and orthomolecular medicine SANMO. Her integration into the SANMO society allows her to provide information on the importance of adequate nutrition for general population, and to promote preventive measures focus on maternal and children nutritional education. Recently, she has embarked on a project to study the chronic effects of low doses of pesticides on health, and a project on the beneficial effects of Algae consumption with international collaboration. Her strong research on nutrition and health make her convinced that she will add value and contribute positively to scientific excellence in Algeria and also in Africa.

On the other hand, the Ethiopian Professor Yalemtsehay was honored with a prize from his Emperor Haileselassie for scoring great distinction in Ethiopian School Leaving Certificate Examination. She joined Addis Ababa University (AAU) in 1972 obtaining her B.Sc degree in Biology in 1977. She was then employed as a graduate assistant in the Department of Biology, Faculty of Science where she joined the first graduate programme launched in the Department. She received her M.Sc degree in Zoology in 1980 with the first batch of graduates as the first woman both at the AAU and the country. She obtained her PhD in Human Physiology from the University of Heidelberg Germany in May 1992. She was promoted to the rank of full professor in January 2009. She was awarded with several research grants and fellowships nationally and internationally. To give some examples, the Ethiopian Science and Technology Commission, the Ethiopian Agricultural Research Organization, the British Council, the International Foundation for Science, the Third World Academy of Sciences, the German Academic Exchange Service and the Alexander von Humboldt Foundation, Germany. Her main scientific work focuses on medicinal plants that are used by communities and test them in the laboratory if they have medicinal importance and assessing health hazard to humans, animals and the environment due to chemicals and other contaminants that are by-products of agricultural practices or industries. She has collaborated with researchers in Ethiopia and abroad and advised many graduate students. The outcome of her research work is exemplified by 92 publications in national and international peer reviewed scientific journals. Currently she is engaged in teaching and continuing her research activities in the College of Natural Sciences, AAU. In addition she is engaged in several professional activities (E.g. Member of the New York Academy of Sciences, Board member of the Ethiopian Academy of Sciences, Executive Board President of the Society of Ethiopian Women in Science & Technology).She has great passion to motivate the young specially women to be confident and successful in their professional career in particular and their overall walk in life in general.

The award ceremony was moderated by Mrs. Mahawa Kaba Wheeler, Director of Women, Gender and Development of the African Union.