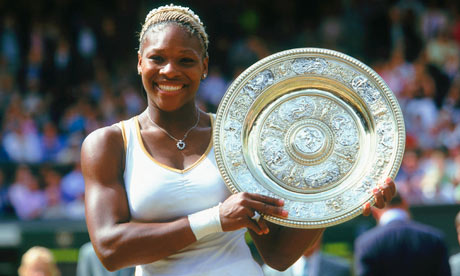 American tennis player Serena Jameka Williams was born on September 26, 1981, in Saginaw, Michigan. The youngest of Richard and Oracene Williams’s five daughters, Serena Williams, along with her sister Venus, would grow up to become one of the sport’s great champions.

Serena’s father—a former sharecropper from Louisiana determined to see his two youngest girls succeed—used what he’d gleaned from tennis books and videos to instruct Serena and Venus on how to play the game. At the age of 3, practicing on a court not far from the family’s new Compton, California, home, Serena withstood the rigors of daily two-hour practices from her father.

The fact that the family had relocated to Compton was no accident. With its high rate of gang activity, Richard Williams wanted to expose his daughters to the ugly possibilities of life “if they did not work hard and get an education.” In this setting, on courts that were riddled with potholes and sometimes missing nets, Serena and Venus cut their teeth on the game of tennis and the requirements for persevering in a tough climate.

By 1991, Serena was 46-3 on the junior United States Tennis Association tour, and ranked first in the 10-and-under division. Sensing his girls needed better instruction to become successful professionals, he moved his family again—this time to Florida. There, Richard let go of some of his coaching responsibilities, but not the management of Serena’s and Venus’s career. Wary of his daughters burning out too quickly, he scaled back their junior tournament schedule.

In 1995, Serena turned pro. Two years later, she was already No. 99 in the world rankings—up from No. 304 just 12 months before. A year later, she graduated high school, and almost immediately inked a $12 million shoe deal with Puma. In 1999, she beat out her sister in their race to the family’s first Grand Slam win, when she captured the U.S. Open title.

It set the stage for a run of high-powered, high-profile victories for both Williams sisters. With their signature style and play, Venus and Serena changed the look of their sport as well. Their sheer power and athletic ability overwhelmed opponents, and their sense of style and presence made them standout celebrities on the court.

In 2002, Serena won the French Open, the U.S. Open, and Wimbledon, defeating Venus in the finals of each tournament. She captured her first Australian Open in 2003, making her one of only six women in the Open era to complete a career Grand Slam. The win also fulfilled her desire to hold all four major titles simultaneously to comprise what she’d dubbed “The Serena Slam.” In 2008, she won the U.S. Open and teamed with Venus to capture a second women’s doubles Olympic gold medal at the Beijing Games.

But Serena also had her scrapes and losses. She underwent knee surgery in August 2003, and in September her half-sister Yetunde Price was murdered in Los Angeles, California. Three years later, Serena seemed burned out. Bitten by injuries, and just a general lack of motivation to stay fit or compete at the same level she once had, Serena saw her tennis ranking slump to 139.

Serena credited her faith as a Jehovah’s Witness, as well as a life-changing journey she made to West Africa for renewing her pride and competitive fire. By 2009, Williams had released a new autobiography, Queen of the Court, and won her place back atop the world’s rankings, winning both the 2009 Australian Open singles (for the fourth time) and Wimbledon 2009 singles (for the third time). She also won the doubles matches at both the Australian Open and Wimbledon that year.

But not everything went smoothly. Williams made headlines in September of that year, when she blasted a lines women for a foot-fault called near the end of a semifinal loss to eventual champion Kim Clijsters at the U.S. Open. The profanity-laced outburst included finger pointing and, according to the lines woman, an alleged threat from Serena against her life.

Williams downplayed what happened, refuting the allegation that she’d threatened the woman. But the incident did not go over well with the tennis viewing public, nor the U.S. Tennis Association, which fined her $10,000 on the spot. Two months later, she was placed on two-year probation and ordered to pay another $82,500 to the Grand Slam committee for the episode, the largest punishment ever levied against a tennis player.

By early 2010, however, Serena was doing her best to move past the incident. Sure enough, that year she won the Australian Open singles and doubles matches, as well as her fourth Wimbledon singles championship.

In 2011, Williams suffered a series of health scares, after doctors found a blood clot in one of her lungs, which kept her away from tennis for several months. Following several procedures, including one to remove a hematoma, speculation rose as to whether Williams would retire from the sport. Her health had improved by September 2011, however, and Williams looked like her old dominant self at the U.S. Open before falling to Samantha Stosur in the finals.

Williams stumbled badly at the 2012 French Open, enduring a first-round loss for the first time at a major tournament. But she was back in top form in London that summer, defeating 23-year-old Agnieszka Radwanska in an emotional three sets to claim her fifth Wimbledon singles title and first major championship in two years. Following the win, Williams rushed to her family in the stands, with tears in her eyes, and hugged them for several seconds. In a post-Wimbledon interview with ESPN, she was asked whether she thought she could top the win, and answered: “Are you kidding? The [2012] U.S. Open, the Australian Open, the French Open, Wimbledon 2013.”

Williams continued her winning streak to her next Grand Slam event. In September 2012, she beat out rival Victoria Azarenka to take the singles title at the U.S. Open. According to USA Today, Williams wasn’t sure that she’d emerge victorious. “I honestly can’t believe I won. I was really preparing my runner-up speech, because I thought, ‘Man, she’s playing so great.'”

By this time, Williams had captured 15 Grand Slam singles titles and 13 Grand Slam doubles titles. “I would like to leave a mark,” Williams once said about her standing in the tennis world. “I think obviously I will, due to the fact that I’m doing something different in tennis. But I don’t think I could ever reach something like a Martina Navratilova—I don’t think I’d ever play that long—but who knows? I think I’ll leave a mark regardless.”

In June 2013, Williams took her second French Open title—as well as her 16th Grand Slam singles title—in a 6-4, 6-4 victory over defending champion Sharapova. “I’m still a little bit upset about that loss last year,” Williams said in an interview with ESPN following the match. “But it’s all about, for me, how you recover. I think I’ve always said a champion isn’t about how much they win, but it’s about how they recover from their downs, whether it’s an injury or whether it’s a loss.”

Nearly one month later, Williams competed at Wimbledon, where she suffered a shocking loss (6-2, 1-6, 6-4) in the fourth round to Germany’s Sabine Lisicki, the No. 23 seed. Her career-best 34-match winning streak over, Williams told Sports Illustrated, “I don’t think it’s a huge shock. [Lisicki] is a great player. Her ranking has no effect on what she should be. She should be ranked higher. She just has a super, super game to play well on grass.”

At the U.S. Open, Williams made a strong showing. She knocked out her younger rival Sloane Stephens in the fourth round before upending Azarenka to clinch the U.S. Open title. It was the second year in a row that the pair had faced off in the finals.

Williams clinched her third straight and sixth overall U.S. Open singles title in 2014 by defeating her good friend Caroline Wozniacki. Her winning ways carried into the new year, as she beat Sharapova to claim the 2015 Australian Open championship. At the French Open in June, Williams managed to overcome illness to win the tournament for the third time and claim her 20th Grand Slam singles title, good for third place all-time.

“When I was a little girl, in California, my father and my mother wanted me to play tennis,” she told the crowd in French after her victory. “And now I’m here, with 20 Grand Slam titles.”

Seeking to add to her hardware collection that summer, Williams had to overcome big sister Venus to advance past the fourth round at Wimbledon. A few days later, she defeated Garbine Muguruza in the final to claim her second career “Serena Slam” and become the oldest Grand Slam singles champion in the Open era.

At the 2015 U.S. Open, Williams again squared off with her sister in a tough quarterfinal matchup, this time pulling away in the deciding third set. The outcome left her two wins shy of the calendar year Grand Slam, a feat accomplished by just three women in the sport’s history. But it was not to be. In a shocking upset, unseeded Roberta Vinci, ranked No. 43 in the world, dashed Williams’s quest by pulling out a 2-6, 6-4, 6-4 win in the semifinals.

Proving to have much more than just tennis clout, Serena expanded her brand into film, television, and fashion. She developed her own “Aneres” line of clothing, and in 2002 People magazine selected her as one of its 25 Most Intriguing People. Essence magazine later called her one of the country’s 50 Most Inspiring African-Americans. She’s also made television appearances, and lent her voice to shows such as The Simpsons.Seeking to provide educational opportunities for underprivileged youth around the world, the tennis star formed the Serena Williams Foundation and built schools in Africa. In 2009, Serena and Venus purchased shares of the Miami Dolphins to become the first African-American women to own part of an NFL team.

The close-knit sisters lived together for more than a dozen years in a gated Palm Beach Gardens enclave in Florida, but they went their separate ways after Serena bought a mansion in nearby Jupiter in December 2013.