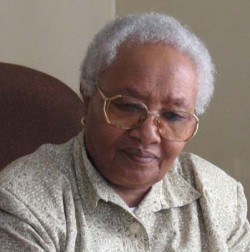 Abebech Gobena has no children of her own but she has a family of about 450,000 people. She has been called the Mother Teresa of Africa. Like Mother Teresa, she is imaginative at raising money. She sells cultural food items to big hotels like the Sheraton.

A month after Mrs. Gobena was born in the village of Shebel , her father was killed by Italians invading Ethiopia . She was brought up by grandparents and married at ten but ran away to Addis Ababa where she eventually remarried and became a quality controller at a coffee and grain company.

Then in 1973 she went on a pilgrimage to the church of Gishen Mariam in Wollo province, north of the capital. It was a time of drought, civil war and famine. She had a loaf of bread and five litres of holy water, which she distributed to victims. Then she saw a woman with a child at her breast. She thought the woman was asleep and tried to wake her, but the woman was dead. She took the child and another orphan home to Addis Ababa . By the end of the year, she was caring for 21 orphans.

Her husband and relatives thought her mad. The family, they said, had too little income to look after so many. She moved out with the children into a poultry house where she built a bed out of mud. To keep the children alive, she sold her jewellery and made and sold injera bread and other food.

Gradually she got help and, in 1986, her orphanage was registered by the government. The Abebech Gobena Orphanage and School now has 200 resident and 482 non-resident pupils, the government providing some teachers. AGOS pays school fees for over 1,000 children from poor families at other schools. Over 1,800 benefit from a child-sponsorship scheme. Over 2,000 malnourished children and mothers receive food.

Mrs. Gobena’s aim as general manager is to make needy children into productive and responsible citizens so they can support themselves and contribute to society. They learn sewing, knitting and weaving, metalwork, plumbing, electricity, photography and silkscreen printing. She reunites orphans with relatives when possible. The number of orphans is growing with the spread of HIV.

Not only children concern her. “I am not at ease,” she says, “with backwardness, poverty, hunger and HIV/AIDS.”

For families crowded into single rooms in congested Addis slums, AGOS has built three schools, a health centre, 268 houses, 40 latrines and 25 water points. It has built 200 kitchens for those forced to cook in their living rooms. It offers training to girls who come from the countryside looking for work and end up abused or in the sex industry, contracting HIV. Over 200 girls have learned food preparation and catering, for jobs in households and hotels. City life leaves little time for traditional Ethiopian food preparation. For AGOS trainees, this is a job opportunity.

In 1990 AGOS launched its first project outside Addis Ababa , at Guder 90 miles away. Initially, this was a farm to provide food and raise income for the Addis Ababa orphanage. AGOS has since established a primary school and a kindergarten for poor children at Burayu, on the outskirts of Addis, and a training centre in Fitche, 70 miles away, where trainees learn weaving, sweater-making, carpentry and masonry.

Eighty miles from Addis Ababa , AGOS runs a reproductive health programme benefiting 457,000 people in Ambo and Dendi districts where fertility is high and early marriage, forced marriage, abduction and illegal abortion are common. AGOS is seeking to reduce the death rate of children and mothers. It has trained local health educators. It has trained providers of family planning services at market places and work places. It has also set up 11 centres for non-formal education in the area, benefiting over 1,500 children.