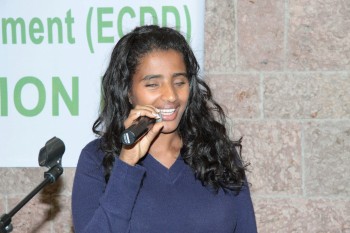 As a community leader, businesswoman, and volunteer, Yetnebersh has achieved much at the young age of 32. After losing her eyesight at the age of five, her mother found a school that would change her path in life and provide an education denied to many of her peers. She has completed a Bachelor of Laws degree (LLB) and Master’s degree in social work at Addis Ababa University (AAU). During her years at the University she became an activist, funding the Addis Ababa University Female Students’ Association and eventually becoming its first president. She chaired the AAU Anti-AIDS movement, and has received a number of national and international awards including the AMANITARE award for sexual and reproductive health advocates.

Studying law catalyzed her determination to be a voice for the voiceless and to fight to improve the condition of vulnerable and socially excluded groups. Soon after graduating with her LLB, she helped establish and then became Executive Director of the Ethiopian Center for Disability and Development (ECDD), a non- governmental organization that applies its knowledge of disability and development to enabling others to include people with disabilities in mainstream social and economic programs. ILO-Irish Aid is among the donors that have supported the ECDD.

Among her proudest achievements, Yetnebersh points to her involvement in helping to establish accessibility directives for Ethiopia’s building code, which now ensure that all new buildings are accessible to persons with disabilities. She’s also advocated for Ethiopia’s ratification of the UN Convention on the Rights of Persons with Disabilities, a comprehensive human rights instrument for protecting the rights and dignity of persons with disabilities. Recently, she opened the Yetnebersh Academy for underprivileged children, overcoming parents’ fears that she could not effectively handle their children and increasing the number of students from 29 to 190. “We need to develop young leaders,” she says. “They will grow up to be tomorrow’s change makers.”

Yetnebersh says her disability gave her the opportunities to become the person she is today. “I am never satisfied by my yesterday’s achievements,” she says. “I am always looking to see how I can do more, how I can give more. I continue to prove to myself and to my community that I can achieve what I dream.”

Yetnebersh Nigussie is Executive Director of the Ethiopian Center for Disability and Development (ECDD) in Addis Ababa. Active in more than 20 volunteer groups dedicated to issues ranging from persons with disabilities to girls’ education to youth,she also chairs the Ethiopian National Association of the Blind Women’s Wing. She was recently appointed Goodwill Ambassador for 2013-14 by the National Disaster Risk Reduction and Management organizing committee of Ethiopia